In the past farmers slaughtered their own animals on the farm for the local supply chain. But regulation and the centralisation of meat buying saw the practice decline.

Another problem was the big abattoirs would not handle small herds again restricting local supply of meats. Today it can be a long time between the farm and the supermarket shelf. But two New South Wales farmers have been working on a solution to bring locally produced meat back to butchers in the surrounding area.

Uralla farmers Anita Taylor and Sarah Burrows have developed an on-farm abattoir to meet the demand of farmers wanting to process their own animals under the brand Red 8 Produce. Their lightweight, mobile abattoir will be able to process cattle, sheep, goats, pigs, deer, and kangaroos. Ms Taylor said the idea has been formulated over a number of years.

“I married into a farming family and it was a sudden introduction into farming life where the farm processed its own animals for the families use,” she said. “Having come from the city, it helped me understand how delicious and tender farm slaughtered meat is.”

This led Ms Taylor and Ms Burrows to think why can’t farm processing of animals happen commercially? They discovered the stringent hygiene regulations that had deterred many farmers from going down this route to supply farm killed meat. 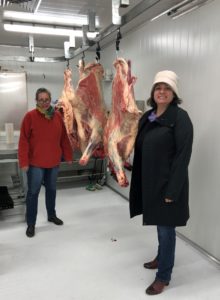 Inside the mobile abattoir, designed for small numbers of on-farm butchery, created by Anita Taylor and Sarah Burrows

“We wanted to save our animals from the stress of live transport, feedlots and holding yards and allow them to live their whole life on the farm,” Ms Taylor said.
But there were also obstructions of micro processing meat on a small scale and making any investment in such processes productive and profitable.

“An abattoir has to be used on more than one farm to meet these criteria,” Ms Taylor said. “Both of us looked overseas, but we didn’t want a big semi-trailer based mobile abattoir.”

This is where Ms Taylor’s pastime, gliding, produced the idea of a mobile abattoir that could be towed behind a car. When a glider lands away from an airfield, it is towed back in a long trailer, so the idea of towing an abattoir was born.

Ms Taylor said it has taken three years from the idea to producing a prototype mobile abattoir, but during this time the pair has been helped with NSW State Government funding. This was through the government’s Local Innovation Network, a scheme to develop regional entrepreneurship and support start-ups. From this the pair developed the start-up business Red 8 Produce with the help of network member, the University of New England’s Smart Region Incubator (SRI).

“Joining the incubator gave us access to mentors, meat scientists, engineers, legal advice and meat processors,” she said. “The SRI introduced us to the CEO of Meat and Livestock Australia Donor Company who invited us to join their producer innovation program, including a grant and in kind support throughout the development process. We’re also grateful for the expert support received through the Farming Together program”

“We want to reward sustainable farmers and also provide consumers with high quality, ethical and sustainable meat,” she said.

The mobile abattoir is made up of four modules, including slaughter and chilling, and at present the prototype central processing module has been built.

“The central unit takes the slaughtered animal into the main processing part of the abattoir,” she said. “It has now been tested and regulatory validation has been achieved.”

Market research has found retail butchers are looking for something different to stock and farm killed meat free from additives is an opportunity. “We have found there is a market for butchers to stock small quantities of farm killed meat,” Ms Taylor said. “We shall start by supplying local butchers in the New England area but we are looking to expand in the future. Each farm producer is different and this will produce a product that is working for our business model.”

Ms Taylor said Red 8 produce was not aiming to replace the big abattoirs and their product is aimed at a niche market.

“Initially we will start with small volumes, processing beef and lamb as we both come from sheep and beef farms. We know consumers want to understand what they are eating and trust their local butcher to deliver such quality produce. We are taking the concept of local farmers supplying local butchers back to almost the old days.”

After the initial testing in NSW, Ms Taylor said there was no reason why their mobile abattoirs could not be made available to groups of producers or larger producers to operate in other parts of Australia.

“What we have produced is not just an abattoir, but a certified food system that can operate on any farm were the farmers wants to slaughter their own animals,” she said.