Butcher Wars – more than a trophy

Why on earth would any right-minded butcher think that breaking down half a side of lamb and pork, creating seven dishes – at least – that are Instagram worthy, in 30 minutes in front of a thousand people, is a good idea?

Because it is a challenge, it pushes you, it tests your boundaries. But more importantly it is a chance to learn, to grow personally and professionally. It is an opportunity to meet with other butchers from around the country who share your vision to showcase the skill of Australian butchers.

Butcher Wars has been held since 2016 – albeit two years were cancelled due to covid, with events in Melbourne, Sydney and Auckland. This year, it is back on again and bigger than ever as part of Meatstock and includes a first, the Boning Wars to be held in Toowoomba in early April.

That first competition in 2016 was a leap of faith, not only for the organisers, but also the butchers that competed, with only a vague idea of what the competition entailed. It is now a well respected competition, with many of the original competitors viewed as the old crew and mentors to the young blood coming through the ranks.

Most people who know Paul’s name will be aware that he is regarded as a Master Butcher, and to be competing against him for the first time may send the butterflies going. But backstage, it will be Paul who will give the newcomers a quiet word of encouragement, check that you have the right string and that your knives are sharp.

Paul recalls that the first competition he entered in 2016, in Sydney, it was a 40-degree day and the sweat was pouring off the brow, and he, like the other competitors had no real idea what was expected.

“It was very much just ‘rock up and put a display forward’, which I did. I was soundly beaten and came last. It opened my eyes to what could be done in terms of presentation and innovation. I tried again the following year, and the next, and improved with each event. 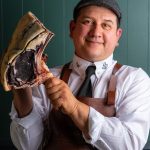 “My advice to competitors is not based on their individual display, but more to get them to think about the overall strategy to getting it done. Do they know what the hero product will be? What will be the other products that support the display theme? Have they practiced it a few times so that it happens quickly, efficiently and within 30 minutes on the day? It is better to have seven or eight well produced products, than to rush 10.”

Paul says that it is more about innovation and display than anything else. The most inspiring displays he has seen, may not have been a winner once cooked. For example, Paul once tried his hand at a ‘meat cake’, which looked sensational, but tasted terrible.

“The competition gives me a huge sense of pride and accomplishment, that the judges have appreciated my products and display, as well as my butchery skills. To be up on stage, in a pressure environment with the MC revving everyone up, Shannon and George egging on the butchers and the crowd cheering, is pretty manic. Ultimately it is such a rare opportunity to showcase butchery skills to the general public, and to have our moment in the spotlight.”

Craig Munro – not always about winning 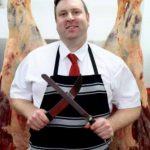 The first year Craig competed, like Paul, he had no real idea of what was to be expected, and planned for his display to be essentially a fancy meat raffle tray. It did not take long for him to realise he had not done enough preparation or planning compared to the other competitors. He came ‘flat last’.

However, it was a learning curve, and Craig and his staff regrouped and entered again the following year. The input of Craig’s partner, a chef, in the third year of competition, was the turning point for producing a winning display.

Craig readily admits that he placed a lot of pressure on himself to do better every year, with a mental attitude that was becoming ‘win at all cost’. A year out from competition, gave him the freedom to realise that competitions like Butcher Wars, was not always about winning.

“It’s not about the trophies it’s about the friendships along the way. I stay in touch with quite a number of the guys. It is good to know another butcher who knows what you are feeling or what you are going through and bounce ideas off.

“It is also not just about me. It might be me on stage, but in reality it is our staff and our customers that make up the team.

“For our customers, it is a chance to support their local butcher and reassure them that they do have a quality butcher and shop – it cements the customer base we have and builds further loyalty. People are just happy to see you up there, having go. It is not about winning or losing, but participating and celebrating our industry and our community.”

Joel Young – butterflies and stepping up

Joel distinctly remembers his first competition, where he had heard about a legend butcher and the butterflies starting to take hold. His first meeting of this legend of the industry, was nothing but reassuring – Paul Suleyman calmed his nerves, gave some quiet advice and made sure Joel had everything he needed. 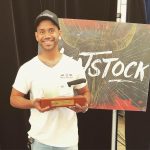 Joel, like Craig and Paul, has now been on the Butcher War circuit for a number of events, but still says the butterflies still happen as the countdown starts. A number of questions run through his mind, not just about his own display, but what others are doing, what the pork and lamb will be like – all the unknowns that can’t be controlled.

“It’s different to a busy Saturday morning in the shop, in that the shop is a safe environment. You know the procedures, you know the customers, you know what needs to be done and you are conscious of what is going on around you.

“In Butcher Wars, I get tunnel vision and focus on what I’m doing. I stick to things I do every day. I have won a number of trophies based on every day cuts, but the presentation is the key. Focus on what you can do, what you are good at and get it done.

“The nerves, the butterflies, the hard work preparing for the competition are all worth it. There is no greater rush and no better sense of achievement on presenting a display that you are proud of. The crowd of well wishers from your own customers and the general public makes you feel ten feet tall.”

Joel added that he is looking forward to the 2022 events, since the cancellations in 2020. “To see butchers I know, respect and look up to that I only get to see at these events is a buzz. It will be good to see new faces and young blood coming through. I’m not that old, but now regarded as a bit of a veteran. Ideally, I would like to do all them especially Toowoomba. I’m looking forward to representing me and my customers and to hold onto the title. It’s a lot of fun.

Putting butchers back in the public spotlight like this, shows that butchery is a good trade. For a lot of people, the processing and preparation work goes on behind closed doors. To show a couple of thousand people the art, the skill and passion of being a butcher is what Butcher Wars is about.