So many competitions have gone by the wayside in 2020, and those for butchers are no exception with Meatstock Butcher Wars, World Butchers Challenge and many more cancelled or deferred.

In an effort to keep connected and hone competition skills, butcher and TAFE teacher, Shannon Walker launched a lamb challenge via the online page, Butchers Alliance essentially to have a bit of fun and showcase butchering skills.

The competition received 65 expressions to enter, with a final of 25 entries submitted from around the world including Italy, UK, Greece and New Zealand. 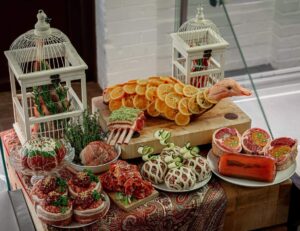 The winning entry, from Ben Tindale, from the UK, said that he had been in the meat trade for more than 14 years after the restaurant he worked at closed and was offered a position at the local butchers.

“I quickly took to the role, learning the skills and knowledge required for whole animal butchery as well as building long-lasting relationships with the customers I served each week. It wasn’t until the beginning of 2019 however that I took on the role of managing the shop. Since then, I have introduced and developed a range of valued added and artisan products inspired by my continuously growing passion and love for the profession.”

Second place getter was Giorgos Evaggelogiorgos  with more than 1000 votes who said on his Facebook page that “I am in the trade for many years, I have met all kinds of people, but never thought that through internet I would get to “meet” brothers and sisters with such passion for our job!
Just by being able to participate in such an event, was a fantastic experience, but having the chance to excel was overwhelming!
Congratulations to Ben Tindale for his beautiful, winning display and to each and everyone of you that made the effort to participate!
I would like to thank all the colleagues and friends who supported my display, honouring me with the first place on people’s choice award.
I would also like to thank Butchers Alliance for hosting such an amazing event, special thanks to Shannon Walker that made such a great job to organise and execute the whole competition!!!
Last but not least, I would like to thank the great group of judges that picked my display and nominated me for 2nd place!
Nothing of all this would have happened, if I hadn’t been a member of the Hellenic Artisan Butcher’s Club, which without their inspiration, I wouldn’t have participated! Until the next one…
Keep safe and strong!

Highlighting a truly international event, first place from England, second from Greece and in third place Brett Laws here in Australia. Brett has been a butcher for about 25 years, starting as a wash-up boy in his father’s shop. Apprenticed with Bushes Meats, and a stint in Wollongong before moving onto Pryde’s Meats, where he has been for the past four years.

Having grown up in a butcher environment, Brett says, it is a way of life, and wouldn’t have it any other way.

“Every day in the shop is different when you are a butcher, you just know that is your life, I love going to work.”

Brett’s work is well respected in the industry, and he has gained many followers on social media for his value-add products, as well as connections with fellow butchers around the world, who support each other and give advice.

Brett had been asked to participate in the Butcher Wars competition that is held during Meatstock, but was reluctant, not feeling confident enough under the pressures of competition.

The format of online, suited Brett, giving him the opportunity to test his skills against his peers in a less stressful environment. The place in the competition has given him the confidence to participate in the Butcher Wars. Brett spent around a week and a half planning the display and preparing the props to go with the dishes. The actual presentation was completed in around an hour and a half.

The theme of the display is based on the freshness of a rainforest and contains around nine products including a stuffed lamb rack, loin, lamb-chetta, chump roast, lamb mince bombs and lamb parcels stuffed with tabbouleh. The show stopper was a ‘lamb cheesecake’ comprising an oat and coconut base, lamb ‘filling’ and a cream cheese top.

“I love experimenting and doing value-add products, and wasn’t very confident about doing the competition, but this is such a good one for the meat industry to see what butchers can do. We are not just a bloke cutting and selling meat, there many butchers in the industry that are true artisans and very good at what they do, and this competition showcases those skills.”

So successful has the outcome been that Brett has since received job offers, increased business in the shop and more followers on Instagram.

Organiser, Shannon Walker said that he did this competition to show the skill and trade and to give everyone an opportunity to see what butchers can do. With more than 6,500 votes for the 25 entries and seven countries represented, it is testament to the connection that butchers can achieve through online platforms

“I encourage you to have a go, and show us what you can do,” said Shannon.