The World Butchers Challenge has officially hit the world stage with the 2020 competition to be held in a state-of-the-art stadium in Sacramento, USA.

Teams from all over the world will be competing in what has been phrased the ‘olympics of meat’ in a three-hour race to showcase skills, innovation and presentation.

The announcement of the 2020 team has Adam Stratton (Sydney’s Tender Gourmet Butchery) given the gong as team captain for the Australian representative team – the Aussie Steelers.

Each year, hopeful team members must compete for the right to be on the team, so it is fortunate that team captain Adam, has been selected once more.

“It’s an honour to remain captain of this team and I congratulate the new Steelers team on their selection,” Mr Stratton said. “I look forward to seeing what we can create and achieve during the next 18 months.”

Not to be over-shadowed by the Steelers, are the young guns – the Young Apprentices and Young Butchers who will also be part of the Australian contingent in Sacramento. The grand final to select the Young ones, was held during the Sydney Royal Easter Show.

Head judge, Bob Retallick said the state finalists had been put to the test and shown a high level of skill, enthusiasm and professionalism.

“The World Champion Butcher Apprentice and Young Butcher competition which precedes the World Butchers’ Challenge pit individual butchers against one another in a test of skills and today was about selecting the very best to represent Australia,” Mr Retallick said.

“This year we put in place a selection process that included state trials before this national final to ensure we found the very best up and coming Australian butchers.

“It was a test of not only their enthusiasm, but importantly their skill and ability to create products that any butcher would be proud to sell and any consumer proud to serve.” 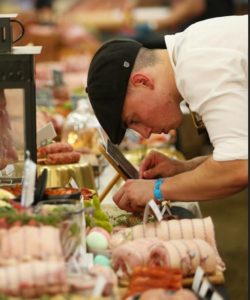 Joseph Marberley has earned a place as a reserve for the Young Butchers to go to the World Butchers Challenge in 2020, Sacramento, USA

The competition, held on the Cattle Lawns at the Sydney Royal Easter Show, attracted a crowd of onlookers during a three-hour test, with the announcement of team members made by Mr Retallick, as head judge.

Gareth Hunt from Fat Cow Gourmet Meats and Suzy Roeger from Meat at Billy’s, both in Queensland, were named the successful Young Butchers, with Joe Maberley from 1888 Certified and Jack Stuart from Craig Cook, both in NSW, as reserves.

“These finalists were a high calibre and the competition was fierce,” Mr Retallick said. “Congratulations to the newest members of Team Australia, we wish you all the very best as you now prepare to join the senior team, the Australian Steelers, in the US next September.”