The winter months herald the start of the salami season – a time when many Europeans make their own smallgoods based on recipes handed down from generation to generation. A time when customers will turn to their local butcher to source the necessary ingredients and advice.

Many butchers will already be familiar with making smallgoods, but on a more commercial level. The home salami maker is more likely to create the family’s secret recipe salami on a small scale. The principles are essentially the same.

To help the home salami maker create a product that is rewarding – and safe to eat – it is worth being a resource for advice as well as stocking the nettings, foundation ingredients and spices.

“The fundamentals of salami making are the same regardless of whether it is a Cacciatore or a Hungarian salami,” said Andrew Morabito, Teacher Meat & Allied Trades, TAFE NSW and self-confessed home salami maker. 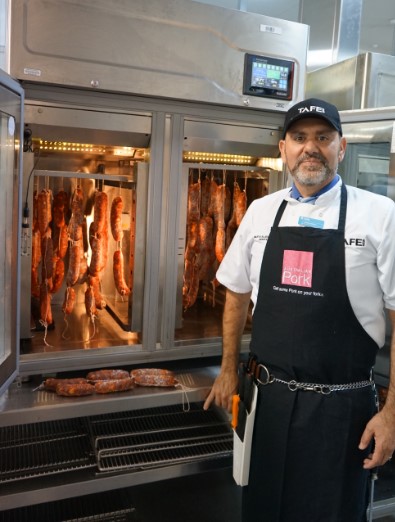 “A stable temperature and humidity, starter cultures, salts, sugars and good quality pork are what we refer to as the foundation ingredients. Whatever the recipe, these key ingredients need to be in the right ratio in order for the salami to cure properly with the right bacteria. The spices and flavours can be altered to suit your personal taste.”

A stable temperature is one of the reasons that salami season is in winter, where the temperature can remain relatively cool and consistent. While smallgood manufacturers are required to use health department approved curing rooms, often the home salami maker will have a dedicated shed, laundry or other part of the house adapted for the purpose. This room needs to have space and airy so that air movement is gentle – not a roaring gale. The simplest way to measure the room’s conditions, says Andrew is to get a weather station from a hardware store.

Typically, a 45mm salami will require 3 – 4 weeks to cure; larger will take longer. A salami that dries too quickly may result in case hardening, where the outer skin dries out, preventing moisture from inside the salami to escape via the skin pores, and risking the salami going bad.

Traditionally, salamis are made using female pork, to remove boar taint. However, Australian castrated males, are unlikely to have boar taint and will work equally well. Some butchers may have noticed that the use of vacuum sealed, or frozen pork can lose colour – this occurs when the juices of the meat dissipate into the bag (or leak when defrosting) which contains myoglobin, the protein that gives meat the red colour.

Andrew says that when he makes a salami at home, he prefers to use 95CL pork, adding 15% pork fat to the overall content. Clean back fat from the neck or over the loin is the best.

The role of salts and nitrates is to assist with the moisture absorption and to create an environment that prevents ‘bad bacteria’ from developing. The ratio of salts will be dependent on the level of fats in the salami. According to MLA guidelines around 2.5 – 3.0% of salt is added. Nitrates typically in the form of sodium nitrate are used to kill the ‘bad bacteria’ and convert to nitrites, which often give meats a reddish colour.

“It is important to understand why we add salts and nitrates to salamis,” says Andrew. “For generations, our grandparents, would use rock salt which usually had trace elements of sodium nitrate, not understanding the role it plays in preserving salami. Table salt, or sodium chloride, does not have those trace elements, so a nitrate needs to be added.”

Typically sodium nitrite measures around 125mg/kg – we take on more nitrite in our diet from leafy green vegetables than from salami, so concerns about the health implications of nitrites can be alleviated.

Like bread or cheese, fermented meats like salami need a starter culture to reduce the acidity (pH) within the first 48 hours from the start of fermentation. Like yeast in bread, sugars are added to ‘feed’ the bacteria of the starter culture. Using around 0.05% of starter culture will need around 0.7% sugars. Glucose, sucrose, brown sugar, honey are all sugars that can be used.

Starter cultures are available in smaller quantities for the home salami maker from some food ingredient suppliers, and in different forms. The choice of which one to use, comes down to personal taste, as some will leave a sourer flavour than others.

Back in our grandparents’ day, the salami mix may have been done in a wooden trough – which would impart the bacteria needed. In today’s society, food grade plastic tubs and stainless steel are used, thereby requiring cultures to be added for the fermentation process.

The biggest risk to the home salami maker, says Andrew is listeria, but can be reduced by ensuring that everything is fully sterilised, that the same recipe and procedure that worked last year is strictly adhered to this year, to remove risk from changing the foundation ingredients and upsetting the preservation balance.

“Mother nature provides us with some pretty good indications of whether the salami is fermenting and drying properly. If the mold on the outside is a white/greenish colour and if the smell is like a smelly cheese you should be ok. If the mold is looking red or black, and the odour is terrible, then it has gone bad. If in doubt, chuck it out.”

Cotton string is recommended over nylon. As the salami dries and loses moisture, the size will shrink – nylon will slip, whereas cotton tends to stick to the salami, preventing it from dropping on the floor. Standard butcher supply nettings are perfectly ok for home salami makers.

Once the foundation ingredients are in place, the level of spice and flavour can be altered to suit personal taste. Some European traditions call for specific ratios of spices in order for it to be called a particular type of salami, but often the family recipe will be based on one handed down through the generations based on what is available to that region.

“The home made salami has for generations been a traditional family event, where every person in the family knew what their job was, and they did it precisely every year, following the recipe and method to the letter. For many of our grandparents those recipes have been handed down, without understanding why they did things in a particular way. I’m a big believer in using modern methods and technologies with those old recipes to create the best possible salami, that is safe and enjoyable to eat.”