The concept of American BBQ has been slowly burning away as a niche industry in Australia.  The growth in attendance of events such as Meatstock and the growing membership of the Australasian Barbecue Alliance suggests the American BBQ is no longer a culinary novelty but a significant commercial opportunity for retail butchers.

The Australian concept of barbeque is to cook a few sausages and a chop on a gas or electric grill.  The whole cooking process is usually completed in half an hour. The idea of the American BBQ is to cook larger cuts of meat at a lower temperature with a wood-based heat source, for five to ten hours.

Growing interest in American-style barbecue is creating opportunities for retail butchers.  American style BBQers (Q’rs or Smokers) need larger cuts, custom trimmed for barbecuing and are always on the lookout for rubs and marinades. Butchers could even consider supplying specialist barbecue wood, aprons and even hiring out smoking kettles.

Traditional cuts for slow barbecue have been brisket, ribs and shoulders. But more recently, Q’rs are experimenting with lamb, chicken wings, seafood, vegetables and sausages. The emphasis is on the combined flavours of the meats, wood smoke, marinades and rubs.

American barbecue cuts are a little different to what Australian butchers are used to.

A Boston Butt is a pork shoulder with the rind removed and the chuck bone taken out, typically referred to in Australia as a square forequarter pork shoulder. St Louis Ribs is another. Usually, an Australian butcher would remove the pork belly layer from the ribs and sell it separately, but with St Louis Ribs, some of the belly is left on, to give the ribs flavour and extra meat.

Meatstock and the Barbecue Alliance

The increasing frequency and attendance to barbecue events such as Meatstock is evidence of the public’s growing interest in American style barbecue. 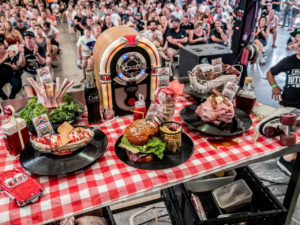 Run over two days, Meatstock aims to celebrate all things meat, music and barbecue.  It includes a Pitmaster competition, a sausage throw-down (how many can you eat in three minutes), exhibitors for associated products and more recently, Butcher Wars.

A Meatstock event was held in Auckland, New Zealand in February, followed by one in Melbourne in mid March and May in Sydney.  Each event has more than 50 teams competing for the title of Pitmaster – the crown of slow barbecuing.

The ABA promotes the traditional rich heritage of American BBQ while embracing the cultures and traditions that Australia and New Zealand can bring to the concept of low and slow.

“I held the first barbecue event in Port Macquarie ten years ago, not knowing whether Australians knew what it meant – twenty teams turned up from all around Australia to compete,” said Jay. “Since then, there are more than 40 competitions sanctioned by the ABA every year around the country.”

To give an idea of the scale barbecue has achieved in the three years since Meatstock started in Sydney, the Facebook page now has more than 55,000 followers and around 2,000 people through the event gate per day. The biggest event in the US has 500 barbecue teams that attend, but on a per capita basis, the Australian market is becoming massive especially given the distances that teams travel to compete.

“The flow-on is that people are knocking on the butcher’s door asking for cuts for low and slow.

“As people upgrade their gas bbq’s, we will see more and more smokers in backyards. You will know low and slow barbecue has become mainstream when the bbq lunch at your mate’s place is not a chop on the grill but a slow smoked brisket,” Jay said.

The low and slow butcher

Char Char Char Butcher in Melbourne’s bayside suburbs is the home to all things low and slow barbecue.

Owner Glenn Dumbrell, a qualified butcher, has had the current shop for around two and half years, with an emphasis on sourcing quality products that suit the slow barbecue movement including brisket, beef, lamb and pork ribs, pork and lamb shoulders.

“Many of the top competitors in slow barbecue started out in their backyards. Some are avid competitors going to each competition to win the ultimate title, while others have evolved into providing products to the industry such as the smoking kettles or the spice mixes.

“It has become a brotherhood – a group of people who share a love of barbecue,” said Glenn.

Glenn believes the industry is still in its infancy, with many still experimenting with the traditional American style of slow barbecue, but with a large pool of cultural influences, there is scope for the Australian and New Zealand scene to develop its own form of barbecue.

“Our multicultural society gives us an inquisitive nature to try new flavours. We have had so many waves of immigrants adding to our mix – adding layers and layers to fusion.  For barbecue, Asian flavours are still yet to be tapped. Our use of lamb has also given us a point of difference to the US – it is not something that they traditionally use,” said Glenn.

Glenn also stocks an extensive range of rubs, marinades and sauces – most produced by small businesses that are not stocked on the supermarket shelf.

“I prefer to supply good quality meat – where the smoke and seasoning doesn’t drown out the flavour of the meat. It is important to find the balance between the three elements.

“For a butcher, slow barbecue has the potential to provide a point of difference between them and the supermarket.

“You won’t find good quality brands or specialist rubs and marinades in the supermarket, but you can stock it in the shop and start a conversation about the best way to slow barbecue. Ultimately, the butcher needs to be able to provide what the smoker wants and educate those new to the concept,” Glenn said.

A customer in the shop has asked for a specific American BBQ cut, but what is it Aussie terms?

A relatively new element to Meatstock, the Butcher Wars, provides an opportunity for butchers – apprentices or fully qualified – to showcase their skills. 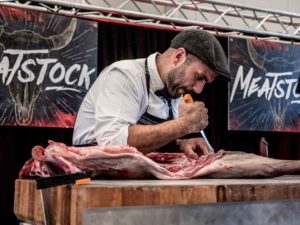 Overseen by TAFE teacher, Shannon Walker, the competitors are given 30 minutes to produce a range of retail-ready products from a half saddle of pork and half a lamb. Judging is based on technique, speed, creativity and final presentation. The products don’t necessarily need to be specific to low and slow barbecue.

Each competitor is given a knife set courtesy of Victorinox to use in the competition and keep. First prize is $1500, second receives $500 and third, $250. The New Zealand competition place getters were Paul Suleyman, Goodwood Quality Meats; James Smith, Pak’n Save Pukekohe, Shannon Walker, meat Merchant.   (Yes, the same Shannon Walker – a late entrant when someone dropped out. Good to see the teachers are still up to the game!)

“The difference with the Butcher Wars is that it is conducted in front of the visitors to Meatstock – the general public, rather than industry,” said Shannon. “Many of the current butcher challenges are held at industry events – the public doesn’t get to see what butchers actually do in competition.”

Jay, Shannon and Glenn see the Butcher Wars as an opportunity for the public to really appreciate the skill and creativity that butchers have and to understand that quality meat comes from a butcher not the supermarket.