A new day has dawned for West Australian-based meat processor, Western Meat Packers Group (WMPG). Owners, Rod and Shana Russell have implemented a strategy to effect generational change in the company and export market expansion setting it up for a bright and prosperous future.

Heading-up the young and dynamic new corporate team is Chief Executive Officer, Andrew Fuda who, at age 38, is part of a new breed of corporate player with a new way of doing business. Based on collaboration and the use of technology, without losing sight of the benefits of long-term relationships with suppliers and customers established by Rod for the past 35 years.

Andrew Fuda has worked alongside Rod for nine years in what could be described as an echo of the master and apprentice relationship of the old world and has since taken the lead role in the company but with the benefits of a perpetually on-tap Rod when required.

Andrew has since been joined by a host of new blood including Jason Spencer who joined the company from JBS as the new General Manager for its processing and boning operation and Lui Rinaldi, appointed to the role of manger of special projects, after 15 years in the pork sector with Craig Mostyn Group. 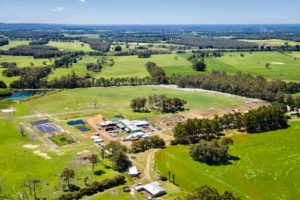 A clear indication of the importance of the technological innovation Andrew places on the company growth strategy is the appointment of tech guru, Bill Wong, who joins WMPG from the University of Western Australia.

“Technology is a very big thing for us, I travel overseas every year, mainly searching for new machinery and technology to improve the business – the industry in Europe and the US is one step ahead of us in terms of these type of innovations,” Mr Fuda said.

“We are investing as much into travel as we do into every other aspect of the business as we know the great difference that innovation and technology make not only to the reduction in operating costs but also to our ability to service and meet customer requirements.

“As a consequence of technological advances in our business we can make real time decisions and changes that customers may require. As an example, we can and do make real-time changes in cutting specifications on the spot during our meetings with them.

“It is really all about collaboration and using technology to provide good old fashioned customer service,” he said.

Western Meat Packers was established as a family-owned and run enterprise by Rod Russell in 1983, and the company has since grown to be WA’s leading family-owned processing company with an annual turnover of $150 million and employing some 360 staff across its considerable operations.

In August last year, Rod and wife Shana, effected a buyout of other family members, taking full control of the company and announcing plans for a major up-grade of its abattoir on a 250-hectare site in the renowned Margaret River region in the state’s south-west.

The investment in the expansion of its Margaret River abattoir will enable the company to fully integrate operations, adding an on-site boning capability in preparation for the accreditations that will allow WMPG to export to China and Malaysia.

The company currently slaughters at Margaret River and transports the carcasses as quarters and sides to its boning operation at Osborne Park in Perth which is located equidistant from both the Fremantle Port and the domestic and international airport.

“We have made substantial investments across our operations but the investment in the Margaret River plant is a strategic one, currently, we can access many notable international markets including Hong Kong, Singapore and the United States markets which highly value the idyllic growing conditions of the Margaret River region where we both produce and source a good majority of our cattle,” Mr Fuda said.

“But the expansion will enable us to export offal and all grades of beef into China as well as Malaysia both of which require a fully integrated facility combining slaughter, boning and cold store in the one location.

“The expansion will also enable us to lift our slaughter capacity from a consistent 400 head a day, five days a week to at least 570 head a day five, six or seven days a week which, when added to a hot boning process for increasing numbers, will ensure we can consistently meet the demand from increasing our international market access,” he said.

Mr Fuda is heavily focused on ensuring the company is consistent in its supply capacity before it continues to expand its markets as opposed to growing the business before this capability is enabled.

He sees incremental growth as the way forward both for the company and the farmers in the region with which it has established long-term partnerships.

“A key component of our strategy is to ensure we do nothing that puts our farmers in the position of expanding their cattle or lamb numbers only to find that there is not enough demand from us which leads to downward pressure on prices due to over-supply,” Mr Fuda said.

“We always keep our eye on the potential result in our approach to growth, consistency is vitally important, both in terms of quality and quantity from the producer right through to the end customer for a range of factors,” he said.

Unlike processing companies on Australia’s east coast, which can source their cattle or lambs across three states with differing climatic influences, WMPG and its competitors on the west coast face unique supply challenges with larger cattle supply in the Spring but limited Winter turn-off.

During this period, the Pilbara and Kimberley regions in the State’s north, at one time, provided the supply during the southern winter but the increasing demand for live cattle for export from those regions has all but halted this supply source.

An expansion of the feed-lot sector has stepped-up to meet this supply gap and Mr Fuda believes that continued growth of this sector is the answer to what has been the state’s perpetual challenge.

But WMPG has taken the approach of addressing potential negative impacts by ensuring that it spreads the risk through diversification of both its product ranges and markets.

“We do a little bit of everything in many different markets which, of course, means that despite what may occur in any one market we can continue to run effectively and profitably due to this diversification across the breadth and depth of the company,” Mr Fuda said.

“We are US and export accredited which means we can supply organic beef into that market, we also produce Angus, short and long-term grain fed, we bone Wagyu, and we do cow, steer and lamb products.

“I think one of the key secrets to our success is that Rod has always taken the view that the domestic market is vitally important and should never suffer due to export markets and it is a course that I continue to hold for the company.

“So, we take the same approach to our domestic market as we do with our export markets providing both premium and good quality but cheaper products for the retail sector,” he said.

WMPG has three brands – Margaret River Fresh, Perth Meat Export and Western Meat Packers –  under which it supplies both its domestic market customers and its considerable export market customer base.

Mr Fuda is the first to admit that its products benefit enormously from the global reputation of the Margaret River region which was forged decades ago by the premium wine industry.

He notes that in all its export markets including Japan, Korea, the U.S., Hong Kong and Singapore, there is high demand for sustainably sourced, clean products and that the Margaret River region is renowned for these qualities.

“We have built on this reputation and the growing consumer trends around sustainability, hormone-free and animal welfare by ensuring we produce in accordance with these expectations, there is no question that it is a major growth market for the industry,” Mr Fuda said.

“In the not too distant future, the local infrastructure will enable us to further capitalise on these factors with work having commenced on the expansion of the regional airport to an international airport, the Margaret River Busselton airport, which will be very helpful for us in terms of air freight for chilled products directly from our plant,” he said.

Mr Fuda takes the view that the processing sector faces a unique set of challenges, most notably that it is constricted in its ability to overcome the rising costs of production in that these cannot be constantly passed on to customers.

He believes that engineering costs out of the business through investment in technological innovation and automation is the way forward.

Government’s role in supporting the industry, in his view, is to ensure that there is a level playing field in terms of Australia’s product across global markets and a stepping up in their negotiations with foreign Governments to ensure Australian processing plants are accredited at a much faster pace than is currently the case.

“There are Australian processors that have been on the waiting list for years for the necessary audits and successful accreditation to export to China and Indonesia that have still not been approved for export to these countries,” Mr Fuda said.

“Government also needs to continue to focus on ensuring our range of Free Trade Agreements are expanded and that they enable an increase in our quotas to major markets because at present, we are behind our major competitors like New Zealand given their tariff reductions are way ahead of us and their quotas are higher,” he said.