The Butcher, the Farmer and her Murray Greys

It started as a Murray Grey breeder’s desire to improve carcase characteristics but evolved into a learning and supply relationship between a farmer and a butcher.

There is no doubt that Melinda Kent loves her Murray Greys. Based in Longwarry, in Gippsland in south eastern Victoria, Melinda is more than happy to promote the farm-based benefits of the breed that include easy handling, strong maternal instincts and good growth rates. 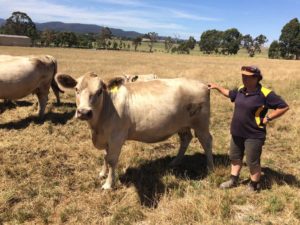 Melinda Kent worked with butcher, Ben Kurrle, to get the possible carcase from her Murray Greys

However, Melinda didn’t know much about carcase yield and meat quality. A visit to her local butcher has resulted in a partnership that benefits both breeder and butcher and ultimately their meat buying customers.

Ben Kurrle and his wife Bec have operated The Meat Safe, the local butcher shop, in Longwarry for ten years. A butcher for the better part of 30 years, Ben has seen his fair share of carcases, but rarely knew what carcase came for what breed or what a good carcase looked like as a live animal. Ben uses local produce wherever possible, but in a region that has a high proportion of dairy cattle and many small beef herds, the carcases from nearby abattoirs at Sale or Warragul, can be variable. Consistent supply of any one body type or breed is difficult.

This changed when Ben met Melinda who introduced him to the cattle production side of the business.

Ben readily admits that prior to meeting Melinda, as long as the carcase had good fat cover and marbling he wasn’t too fussed about what breed it came from.  Getting to know local farmers and the numbers and characteristics of the cattle they breed and finish has meant that Ben better understands the quantity and quality that can be supplied. Ben now prefers to take Murray Greys first, then Murray crosses and then crosses from other breeds that meet the same standards.

Ben and Melinda have learned from each other.  When Melinda first approached Ben to help assess the carcase qualities of her Murray Greys, the fat cover and marbling were nothing special. The challenge was on. Melinda then reviewed her breeding and feeding program to attain the levels that Ben wanted.

“As a breeder, I am aiming for a 400kg live weight, with 3-5mm fat cover. It can be variable based on seasonal conditions – summer will have lower fat cover, while spring can be higher,” said Melinda.

“We use Radford’s to process the cattle and then bring it straight back to Ben, which takes out some of the middleman costs.  They look after us well and know us personally and do the small runs and it is always good work.”

“I can now pick a good carcase when I look at stock in the paddock based on what Ben has taught me. And Ben too, can now relate body shape and fat cover on a live animal to a carcase outcome,” Melinda said.

Temperament is important for convenience and safety when handling livestock on the farm but it is also critical when stock are moved from paddock to the point of slaughter. Murray Greys are a naturally docile breed, a trait Melinda is keen to maintain and enhance in her herd.  Ben says this trait combined with careful handling at the point of processing, is paying real dividends as Melinda’s cattle have very little stress-induced dark meat. 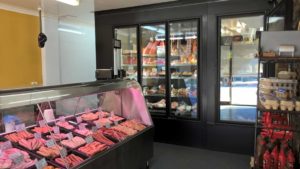 “The majority of our customers are not particularly interested in what animal the steak has come from as long as it is good quality. For me as a butcher, I know that it is local, good quality meat. It just happens to be Murray Grey,” Ben said.

Ben’s involvement with Murray Greys was not a deliberate move; it has evolved from Melinda’s desire to improve her herd and to see what it looked like on the hook.

To help promote the Murray Grey breed, Ben has started doing BBQs at local rural shows including Farmworld, held near Warragul. On the menu are sausages and steaks.

Ben says, the partnership has resulted in meat that rivals the best available.

“Melinda loves breeding cattle as much as I love being a butcher,” said Ben. “What we have here is a relationship that has evolved from shared knowledge.

“The butcher shop gets good quality meat, we know the animal has been well looked after and we can work with the farmers to get the possible result at the farm gate.”