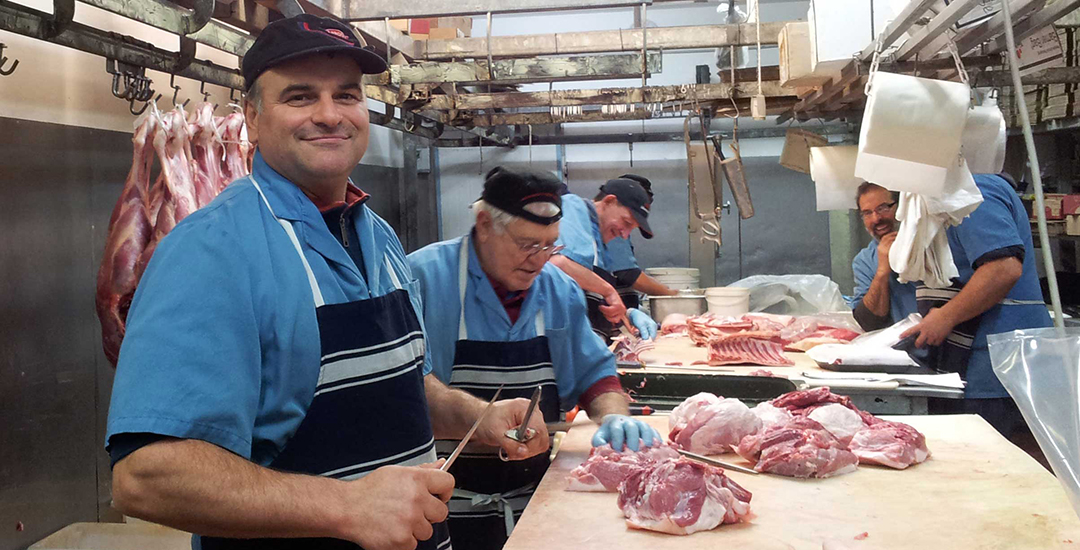 Making value-add work for you

Often with Australian Meat News, one story leads to another. In this case, Chester Mead at Viking Food Solutions suggested we find out just how well Phil and Nicola at Karve It Up have diversified into a niche market and succeeded.

In the last issue of AMN, Chester shared with us that diversification was the key to butcher shop success in the UK, but knew that there were businesses locally that highlighted what he meant.

Karve It Up, in Greensborough Plaza, Melbourne specialises in grass-fed meats – nothing too unusual in that. A closer inspection of the display shows myriad of single serve ready meals competing for space with fresh meats and the fridge and freezer is stocked with paleo, gluten and dairy free foods.

When planning the shop, owners Phil Jackson and Nicola Baaini had always wanted to cook meals that ticked the box for health and nutrition as well as food intolerances. Every day, the team along with Chef Dean Goode cook and package meals that are either single serve or family size.

“We cook six to seven single serves of up to ten different dishes every day along with a selection of family-size meals,” said Nicola. “On top of that we have a large range of paleo and dairy free products in the freezer, plus traditional butcher fresh meats. Many of our products are gluten free and Low FODMAP (no onion or garlic) by default.”

In the two years since the store opened, competing with Aldi, Coles and another butcher within 50m has been a challenge.

“Customers make the mistake of comparing our products with the supermarkets,” said Nicola. “What they don’t realise is that our pie is $22 for a family size and weighs in about 1.2kg whereas a commercially produced pie from the supermarket might be $13 but is half the size. A supermarket ready meal is around 300gm at $4. Ours are a minimum of 500gm and packed full with fresh ingredients.”

Meals can be pre-ordered but many customers drop past the shop and select as many as ten meals to take home, taking pot luck on what is available on the day.

“We have many customers who will buy a number of single serve meals to take home. Often they are families who are ‘ships in the night’ – eating at different times. A quick re-heat and anyone in the house can have a nutritious meal in a matter of minutes.

“We have had some people come to us who previously used meals like ‘Light and Easy’ – not for dietary considerations but for convenience – who have found our ready meals far more cost effective.

“We are happy to do some customising for ordered meals. Swapping out broccoli for beans, or mash for roasted potatoes is no problem. We do find that most people are happy to take pot luck.”

A customer who drops past and buys ten meals often puts a strain on the ability to re-stock. Chef Dean will start the day at 6am, preparing for a full window display of meals, only to be cleaned out by lunchtime, which means creating more dishes for the afternoon rush and preparing for the next day. Competing with this is the customers who buy fresh meat from Phil’s side. “Sometimes we have to make a hard choice – does the lamb go into a pie or do we keep it as a fresh cut?”

Phil, who has been a butcher for 25 years (and winner of the William Angliss Victorian Work Skills Competition in his day), knows what works and what doesn’t having served his time in various butchers and Safeway (now Woolworths) supermarkets.

“We get certified grass fed beef and lamb and we use free range chicken and outdoor bred pork,” said Phil. “I prefer to have the meat non-rinsed. I find non rinsed beef is a better end product for the consumer. Rinsed beef often results in residual water in the pan when cooking and can cause cuts like mince, stir fry and diced to boil in excess liquid rather than fry which toughens the meat. Our customers have often commented about how happy they are that our meat doesn’t produce that result when cooking”

“Our fresh meat big sellers are the porterhouse and scotch fillet; T-bones have slowed down a bit in recent times because our customers don’t like to cut away the bone. They want their meat boned out. Many times we have explained to them that the best flavour is where the bone is. I often take a different angle with meats to create something new, like a lamb saddle steak which is just the midloin chop section, boned out and then rolled with kofta seasoning and spinach.”

Like many butchers, Phil has seen the price of red meat soar in recent times, but has not passed it on in full. With two supermarkets and a budget-oriented butcher nearby, he can’t afford to. Ready meals have provided an outlet to reduce wastage with secondary cuts and trim going into pie fillings, stocks and sauces.

In the two years that the store has been open, Phil and Nicola have grown from strength to strength. In the early days, Nicola would serve the counter most of the day and then at closing time, start cooking for the next day, often until past midnight. It was a mere eight months before Chef Dean came on board to help with the increase in demand. The shop now supports six staff through the week and two extra on the weekend.

Nicola says that regardless of your shop size, this business model can be achieved. In the beginning, Nicola would make two or three serves of a few dishes and ran the risk of wastage. It quickly became three or four and now is up to seven, ten for popular dishes. It is now at the point where space is at a premium in the display and storage is encroaching on the butcher side. In less than two years, the business has just about outgrown the premises.

The idea for the shop was Nicola’s. She has a background in business management and opened one of the first gluten-free café’s in Melbourne. Intolerance to gluten and onions, has given her the insight needed to provide customers with ingredient intolerance meals.

Dean was originally a commercial chef, but quickly needed to adapt his thinking to no garlic or onion, gluten free and dairy free options, while presenting ‘home style’ meals. He and Nicola have had a great deal of fun exploring the paleo methods and are pleasantly surprised at how good the food can taste.

For Phil and Nicola, preparing ready meals is not about increasing profit through value add, it is about providing quality, healthy food which has proved to be an excellent niche market.

Phil predicts, traditional butcher will do less traditional cuts and more time saving products that are appealing and healthy. “Value- adds can’t be the rubbish you can’t sell with marinade thrown over it to disguise it – customers are smarter than that.

“If you can save them time, they will pay the dollar. Many are time poor and many simply can’t cook.

“Every butcher needs staff who know how to cook to advise the customers. We often hand out pamphlets on how to do pork crackle or how to cook a Christmas turkey.

“Social media has some information, but customers like to ask questions. People will not buy the product if we can’t tell them how to cook it,” Phil said.