Casalingo Smallgoods is a name familiar to most in the smallgoods business.  A recent name change to South Food Group parallels some innovative additions to its traditional smallgoods product lines.

When a company uses 100 pigs per week, to make a large range of pork-based smallgoods, inevitably there will be by-products.  Pig skins hold little value and were a big issue for South Food Group.

General Manager, Carmine Ventura was looking for solution when he became aware of a company in Melbourne that specialised in pork crackle as a snack food – the idea of utilising their own pig skins to make a similar product evolved. They bought the company.

Rendering off the fat from the skin and then frying creates a high protein snack that puffs up similar to popcorn. It is sold as an alternative to potato crisps and nuts and contains less fat than most potato crisps.  It is sold through Dan Murphy’s and Asian supermarkets under the brands Crackle & Co and Chicharon. 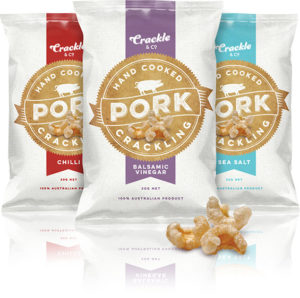 It is has also found a lot of favour with the ketogenic and paleo diet fans who are looking for low sugar, low carbohydrate protein-based snacks.

“Establishing a retail distribution network for the crackle products has actually been surprisingly simple,” says Carmine. “We are already sending a heavy pallet of smallgoods around the country, so adding a few boxes of lightweight snacks did not add to the overall freight cost.”

South Food Group are looking to expand further into the protein snack sector, as well as expanding the overall smallgoods offering. A key decision will need to be made for the future as to which is the better option – to move premises as the current site has run out of floor space, or to streamline what they have to improve productivity.

“It is exciting time for the company as we have the retail ready protein snack products that is evolving at a nice steady rate, while the export market continues to grow.

“Attending Fine Foods Australia has allowed us to connect even further with new channels and the crackle has given us a handy conversation starter. Trade shows are definitely giving us a good deal of exposure – we will look to doing more in the future.”

It is not an unfamiliar story – an Italian immigrant moves to Australia in the post-war period and does what he knows best – opens a butcher shop. With sales out the front and smallgoods manufacturing out the back, the Italian butcher develops a reputation and soon the business grows. Familiar names such as as Bertocchi, Fabbris, D’Orsogna and Tibaldi follow a similar path.

The other recognisable name is Casalingo. 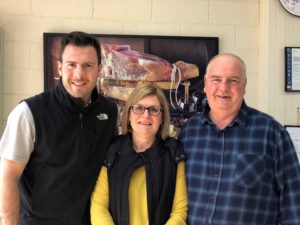 Carmine Ventura – the third generation  – manages Casaling Smallgoods with his parents Domenic and Maria. Carmine’s grandfather (Carmine’s namesake) emigrated from the Abruzzo region on the central east coast of Italy.  He set up shop in North Fitzroy, Melbourne. He soon developed a reputation for excellent prosciutto, the family business expanded into wholesale, supplying delis and butchers across Melbourne. Domenic took over the management in 2001. The company moved to a factory in Clayton, a south east suburb of Melbourne.

“Dad wanted to move away from retail and focus on wholesale,” says Carmine. “We had a good reputation and customer base to just focus on our premium smallgoods products such as prosciutto, porchetta, pancetta and our family recipe for Italian sausages. We had three main brands for smallgoods, Casalingo, Greenvale Farm and Fiora.”

“Those trade shows were very successful, but the biggest stumbling block was that we operated under the Casalingo brand, but had other brands, which made it a little confusing. The decision was made to re-brand under one name, with the individual brands representing a specific product set,” Carmine explained.

As a consequence, South Food Group was born 18 months ago and all products are now labelled with their unique product brand and the company logo plays a secondary role.

“Initially, we were concerned that using the name South Food Group would make us look too big and corporate, but we want to emphasise that we are still a family-owned Australian business that still has the flexibility to adapt to our customers’ needs.”