Extending a lifeline to young butchers

The Lifeline International Young Butchers Picnic is a celebration of the next generation of butchers, their futures and of life.

A charity event held annually in Perth to support Lifeline WA, the Picnic is now in its 14th year and held in conjunction with the Smokin’ in the City competition as a street festival in Perth.

Its founder, Vince Garreffa is a larger than life character, well respected in Perth and in the meat industry in general. He is the owner of butcher shop Mondo di Carne in the Perth suburb of Inglewood, which has a reputation for quality butchery and products. Over the years, Vince has nurtured many young butchers through apprentices and into full time work and this event is the culmination of his desire to help young butchers be passionate about the meat industry and support for his chosen charity, Lifeline WA.

The competition started at a grass-roots level with a few local apprentices and a couple from interstate, but has now grown to include an international representation from France, Canada, UK, Ireland and New Zealand.

Organiser and ambassador for the event Robert Retallick of GourmetBob – equally as passionate as Vince about the meat industry – says that the competition is for young butchers who show promise as a butcher, who have a desire to learn the trade and develop a network plus a recommendation from an employer or educator.

“We have no formal entry requirements, it’s mostly word of mouth,” says Bob. “From the extensive network Vince and I have we hear of young butchers that have potential and we invite them to take part.”

In the weeks leading up to the event, Bob will contact each of the entrants and advise them which primal cuts they will be using on competition day. In most cases it is beef, lamb and pork – often supplied through industry donation. 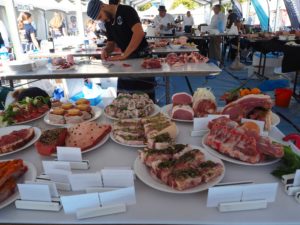 On the day Bob says the entrants are given three hours to create as many value-add dishes as they can to a retail standard. They are then required to cook one product and present it to restaurant standard, complete with presentation, garnishes and ticketing. The butchery and value add component is judged by three industry representatives and a further three chefs score the cooked product.

“Vince and I prefer not to be involved in the judging given that we are more than likely the ones to have brought these young butchers to Perth in the first place, so we collate the scores from the judges and do the award presentation. The competition is not about pitting contestants against each other but an opportunity to learn and grow and move forward in their careers.”

Vince’s connection to Lifeline started on talk back community radio, 6PR where he met Pastor Graham Mabury, where Vince shared in a radio segment his 40+ years of experience of butchering with the next generation. It became an invaluable friendship and strengthened Vince’s passion for community service and his support for Lifeline WA.

“Vince will be the first to admit, and speaks openly with his own struggles as a young man with anxiety, depression and suicidal thoughts,” says Bob. “It was the discovery of food and becoming a butcher that changed his life around to re-discover the joy of life, and he wants to be able to share that with the next generation of butchers.”

In conjunction with the Picnic, Vince and his wife, Anne host a Brunch through the Mondo Community Warriors to raise additional funds for Lifeline WA.

The success of the Brunch has seen fundraising of more than $430,000 in 2016 and cracking the $500,000 the year before. The concept of the Brunch is for guests to enjoy the food that Perth and Western Australia has to offer, cooked by leading chefs and waited on by Perth celebrities. In the years that Mondo Community Warriors have been operating, the group has raised more than $3million for Lifeline WA.

“Lifeline WA and Mondo Community Warriors have worked hard to make this a bigger and better event every year,” says Nicole Bird, community partnerships and events coordinator with Lifeline WA. “From a small community event starting 19 years ago for butchers to promote their wares, it is now an international event with young butchers from all over the world. The funds raised from the event go towards training more telephone crisis supporters to operate Lifeline WA’s 13 11 14 help line.”

The next Lifeline International Young Butchers Picnic will be held 19 – 23 April, 2018. If you would like to know more contact Bob Retallick on 0418 576 850 or email robert.retallick@gourmetbob.com

For crisis or suicide prevention support, please call Lifeline on 13 11 14